Earlier this month (October 2019) more than 230 experts from 35 countries met in Auckland for the Plenary meeting of the Missile Technology Control Regime. The Plenary marked New Zealand’s assumption of the Chair for the 2019/2020 period, when the gavel will be handed over to Austria.

MTCR Partners were formally welcomed to Auckland by Ngāti Whatua, the local Māori iwi, in a traditional Mā 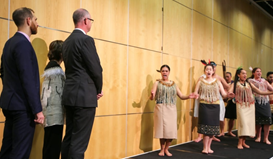 ori welcome and enjoyed New Zealand’s warm hospitality and sampling some of the local cuisine.

The New Zealand delegation enjoyed the rare experience of not being immensely jet-lagged, although many partners may not have been quite so enamoured of long-haul travel. Holding the meeting in here also afforded the opportunity for a wider range than normal of New Zealand officials interested in counterproliferation issues to attend and all said that they had found it a valuable experience.

The unity of purpose shown by MTCR partners to prevent the proliferation of missiles capable of delivering weapons of mass destruction, as well as related equipment and technologies, continues to be fundamental to the Regime’s success. This was the first plenary meeting since 2017 and MTCR partners displayed an eagerness to get back into action with valuable interactive exchanges throughout the week.

The Information Exchange and Licencing and Enforcement discussions highlighted that the rapid technological development and changes in proliferator procurement practices related to sensitive items and technologies continue to require greater awareness and to be effectively addressed.

The Technical Experts Meeting agreed changes to the MTCR Technical Annex (control list) and continued discussions on technological developments which could impact on the Annex.

The work which the MTCR partnership does will remain an important contributor to global non-proliferation and international security. There can be no doubt about the importance of your objectives: recent years have served to highlight the destabilising impact missiles and missile technology can have on regional as well as global security.”

ell Higgie – the first female Chair of the MTCR. New Zealand hopes there will be many more to follow!

On Friday afternoon, MTCR partners agreed a joint Public Statement by consensus, the full text of which can be found here. The statement reiterates the Regime’s commitment to limit the risks of missile proliferation by controlling transfers that can contribute to delivery systems that can be used for Weapons of Mass Destruction.

For those states not directly involved, there are many opportunities to engage through formal outreach missions or less formally on the margins of international events. You can also catch-up on the action from the Plenary meeting and keep an eye on the Regime’s activities including outreach travel from the official MTCR ​Twitter account: @MTCR_Chair